well.. not really, but it is pretty interesting to look back on the journey that brought us to Georgetown, and now my current situation is intersecting with another thread that began back in 2004.   It was then that the Director of Summer Programs asked me to plan an end of summer trip for International Students who had been attending our ESL program at Wyoming Seminary.  Having recently moved back to Pennsylvania from New Hampshire, I was keen on creating an itinerary that would include many of my favorite places in New England.   I also wanted to include an outdoor experience as part of the trip.   After some research, I settled on making a visit to Chewonki in  Wiscasset, ME.   as a potential venue for a 3 night camping experience.

Over March Break in 2004 I traveled with my family to check out Chewonki.   We were totally enthralled with the beauty of the place and impressed with the various components that make up the Chewonki Foundation   https://chewonki.org/  …  We were surprised to find high school students on the campus and learned that in addition to  a farm, a summer camp,  natural history programs, and the outdoor classroom  program which would organize our camping expedition,  they also had a well-established semester school  for high school juniors called Maine Coast Semester.   We had the good fortune of being there over lunch, so we joined the community for a meal.  My daughter, Alison, who was in her sophomore year at the time, elected to sit with semester students.    A good portion of the the food that was served came from the farm on campus, and the meal was wholesome and very satisfying.   As we were preparing to head back to Pennsylvania,   I was  totally sold on including the facility as part of the trip that I was planning, and Alison was totally sold on the idea of spending a semester at Chewonki during her junior year! 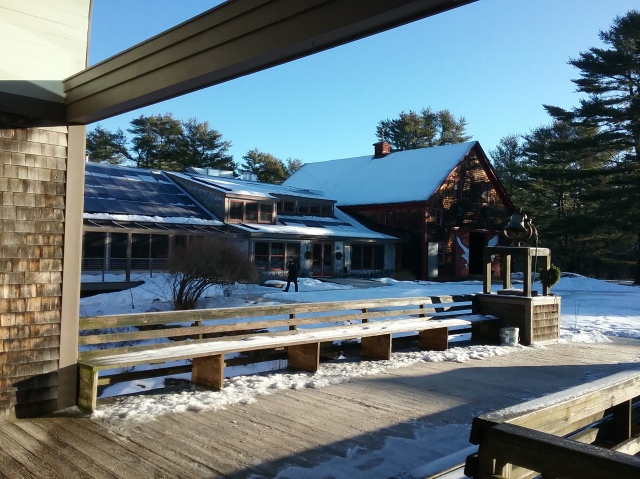 In fact, Alison did attend MCS during the spring semester of her junior year.  It was a life changing experience for her.. living in a cottage with around 8 other girls with a wood stove as the sole source of heat..  taking on a lot of responsibility and gaining a significant amount of independence…  working on the farm,  guiding a team of horses pulling logs out of the woods..  It was an intense but rewarding experience.

And, for the next ten years,  Chewonki played a significant role in what we called  Session III – a tour of New England.   For the majority of the students, this was the first time that they had camped, and for those who lived in cities all of their lives,  it was an introduction to the beauty of the night sky.   It was challenging, to say the least, but all survived!

One afternoon in 2008, while I was working with students on the stage crew, I proposed the idea of taking a community service trip at the end of the school year.   Everyone was interested, so I began to research ideas.   At some point, it dawned on me that we might be welcome at Chewonki  to work for a week as they prepared for the summer camping season.   I had to sell the idea to the folks at Chewonki, and explain that the students who were interested would have experience with tools and working on projects.   We won their approval so a few days after graduation we piled into a van and headed to Maine.  This was a first trip to the state for most of the kids..  By the end of the week we had completed a number of projects.  We enjoyed being involved with the community and we (I) especially enjoyed visiting a different ice cream shop each night of the week 🙂    We went out for a special dinner at a restaurant on the water, and we played mini golf.  We went bowling and we spent one full day visiting The transportation Museum and exploring Rockland after stopping at Moody’s Diner for breakfast on the way!

The trip was amazing.  As we got ready to leave and head back to Pennsylvania,  I floated the idea of returning the following year.  The thought was warmly supported by the folks at Chewonki.   As things turned out,  I made the trip 5 more years, and I have stated many times that these community service trips were, hands down, the most significant experience in my teaching career.  Over the course of 6 years,  we gutted two cabins,  shingled a cabin roof,  split and stacked firewood, built steps, fences,  platforms, painted buildings, painted the bottoms of boats,  painted rooms,  cleaned hay lofts,  loaded hay on a wagon in the field,  weeded gardens..   wow! 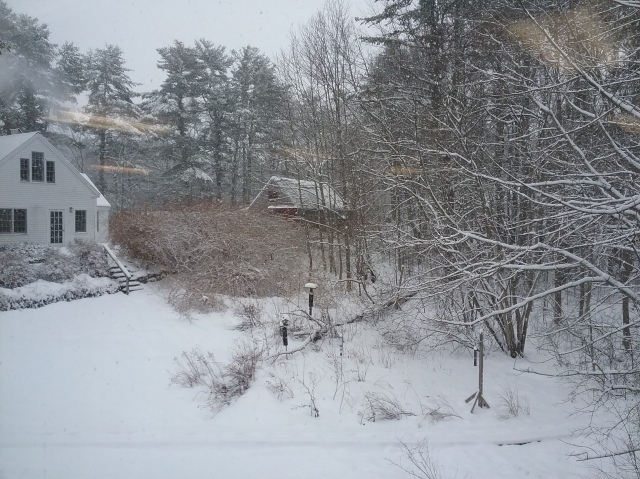 And now for the intersection.   Wiscasset is just 30 minutes away from where we are in Georgetown.   And, the semester school is still going strong.  And, I learned back in the fall that they were in need of a part time math teacher for the spring semester….   so, I wrote and suggested that I might be able to teach..   my interview included the predictable elements.. teach a class,  meet with students, meet with faculty,  meet with the Head of School.   It also included working in the barn yard  with a student for two hours on a drizzly afternoon,  repairing fences!   It was a lot of fun, and just up my alley..   So, I have spent the last two weeks in ramp-up meetings, getting to know the system, getting to know my new colleagues,  rekindling relationships from my former experiences with Chewonki, and getting totally excited about welcoming a new group of students next week as they arrive for what,  many will be, a life-changing experience, just like my daughter 13 years ago..  I’m expecting that it will be life changing for me too 🙂

I was in a meeting just this past week in which a participant described how, when she would read a book as a child, she was totally oblivious to whatever may be happening around her.  Her family learned that if they wanted her attention, simply calling out her name would not do it… they would have to tap her on her shoulder to break her out of “the reading zone”.     It was interesting to hear her story, because I could totally relate.  I recall curling up in a chair with a book and detaching from the world around me…

The past couple of months I have had the wonderful opportunity to dive into a number of books, and I decided it would be fun to  share some thoughts….

A few years ago I picked up a copy of  The Country of the Pointed Firs  –  but I never had the time to really get into it.    Back in the fall, I stopped in our little library in Georgetown as the staff were preparing to close the facility for the winter.   We were invited to check out books for the winter season.  In addition to picking up a copy of the book, I also grabbed a copy of this biography of the author, Sarah Orne Jewett, thinking that I might develop a better appreciation of   Pointed Firs, if I had a deeper  understanding of its author and her life.   I am enjoying reading the biography, but I must admit that some other books have interrupted my reading!

Nomadland was a Christmas present from my daughter and son-in-law.   They picked it with the idea that we could relate to it based on our recent experience as workampers which is pretty well documented on this blog.   In fact, it portrayed  an experience that is rather different from our own.   The book follows a number of different folks who are living on the road, often as an alternative to homelessness.   It certainly opened my eyes to the reality that there is a segment of the population, modern day migrant workers,  many of whom are at or past typical retirement age who move from campground to campground,  to the sugar beet harvest, to Amazon warehouses during peak season,  but not back home, because they don’t have one….     The book provided a unique glimpse into a lifestyle that typically remains under the radar. 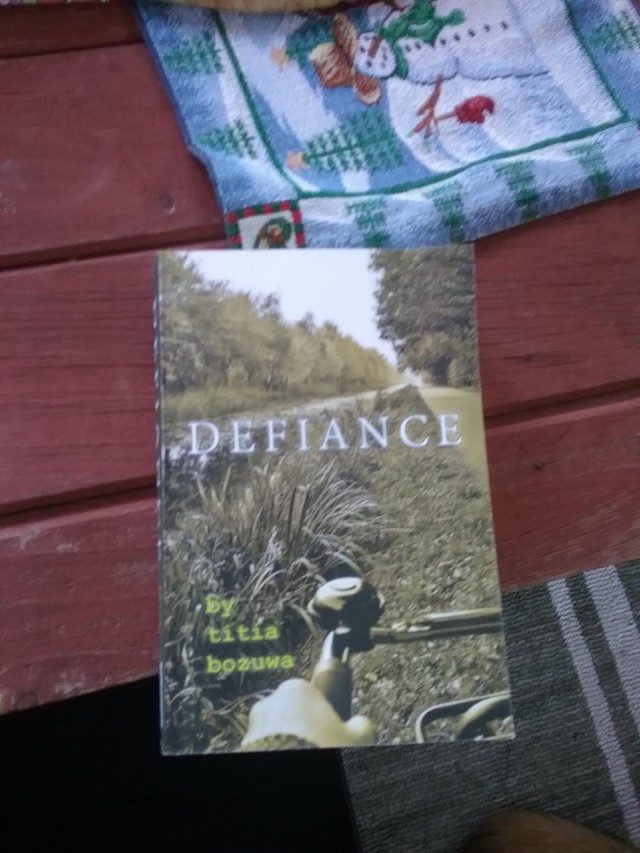 Defiance –  I found this book to be totally compelling – full disclosure requires that I report that Titia is a friend from my past life, living and teaching in NH many years ago.  Her husband, Gijs, was the school doctor at Brewster Academy where I taught.   Titia has written about her experience growing up in Holland during the Nazi occupation,  In the Shadow of the Cathedral, as well as about Gijs’s experience spending his teenage years in  Japanese  concentration camp in the South Pacific, The Emperor’s Guest .    This book is her first novel which follows the lives of a group of young college students in Holland during the World War II  years..    Although it is a fictional account, I am quite confident that it gives us a glimpse of the reality of surviving those years in addition to a study of the full spectrum of humanity under stress..

Where you will Find Me :  Risk, Decisions, and The Last Climb of Kate Matrosova    –  sorry that I don’t have a picture of this book…  This is a fascinating account of  the death of Kate Matrosova  who attempted a traverse of the Presidential Range in the White Mountains of New Hampshire  during a particularly severe winter storm in 2015.   There is no doubt, that the fact that my son played a role in the search and recovery operation made the book that more compelling for me,  but it does provide some insight regarding the winter outdoor enthusiasts in the White Mountains as well as the challenges and dangers they encounter.    We had the added bonus of being able to attend a lecture given by the author, Ty Gagne,  at LL Bean last week.     Having read the book, both my wife and I have a renewed interest in hiking the White Mountains ( although, not necessarily in the winter)  as well as a deeper appreciation for what a valuable resource the national forests are!

If you happen to have read any of these books and want to share some thoughts..   or if you have any questions,   it would be great to hear from you!     cp23_1983@yahoo.com