last year we dropped by the neighbors for a quick visit during there cider pressing weekend..  and we immediately made the decision to return for the full day this year.. so glad that we did!     If you study the picture above, you will quickly figure out that this is no ordinary cider pressing operation.   In fact , the entire set up is based around using bikes and people power to drive the machines at each step of the process.   In the picture above, two cyclists are working together to run the machine that chops up the apples..

The apples that are being loaded into the hopper have just come through a washing process that is operated by a single cyclist.

I have to apologize for the lack of clarity in this pic..  i was riding the bike as i took the picture…  this is the station that does two things..  it provides the power to operate the pump which presses the cider.. and it also  runs the grinder that you see in the foreground..   what is the purpose of grinding corn when running a cider press?   you  might ask..

can’t answer that question at the moment because it is lunch time!   you will note that this is no small operation..  lots of folks show up for what has become an annual event.. people from California, Michigan, and lots from Massachusetts where Ben, the inventive mind behind all of these machines, went to school..   who would have imagined  that a degree from MIT could lead to a story like this!

While lots of folks were sorting, and washing, and crushing , and pressing apples,  a few were busy preparing a huge pot of vegetable stew  and when “lunch time”  was called, there were a lot of grateful, hungry people ready to eat..  note the use of a cooler to keep the stew hot…  great idea….

the effort proves to be well worth it..   there will be cider for everyone to take home…   this is a wonderful example of community gathering and working together for the common good…  nothing like it to generate a sense of camaraderie and satisfaction  and well-being..

During the afternoon, a small group has been working in the back of the barn..  preparing a huge pot of chili ,  apple crisp, and , perhaps you have guessed it,  corn bread!   Now you know the “rest of the story”  as Paul Harvey would say..    not only did we grind corn, but also rye which went into the corn bread as well… 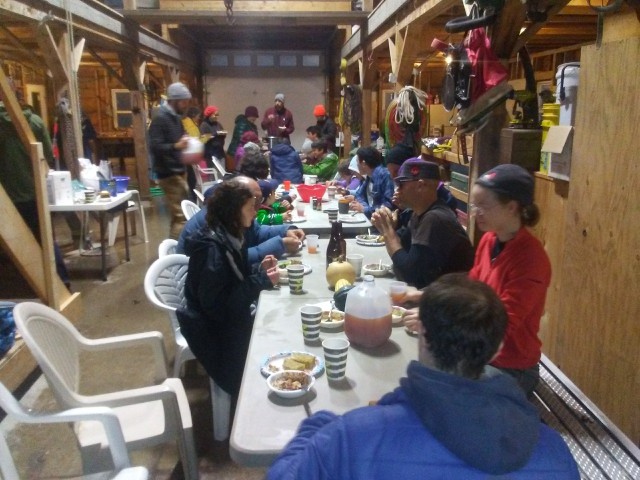 Time to celebrate a job well done..  and to eat lots of chili , cornbread and  apple crisp.. with fresh cider to boot…

I can’t make a lot of predictions for the year 2019, but I sure can tell you what we will be doing towards the end of October  a year from now 🙂      Thanks to our neighbors, Emily and David for sharing this opportunity with us…   Life is good in Georgetown!