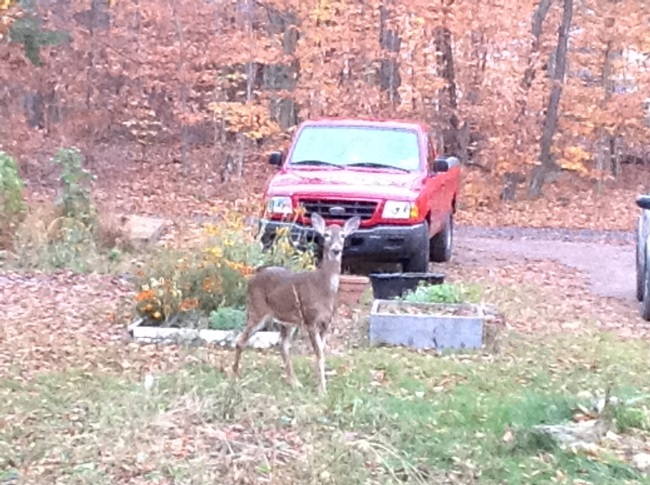 The flowers are gone – many succumbed to the heavy frost that we experienced this past week,  but more than a few ended up being dinner for this lonely deer who has visited with some regularity the past few days.  By all rights, we should be angry with this guy, but we just can’t seem to adopt that point of view.  Perhaps, after living in town for 13 years, the country experience, including bear and deer in the yard is still just too exciting.    We already made the decision to focus on flowers rather than vegetables – due to a combination of limited sunlight and  the ever  present  population of  deer, rabbits  etc.   But it is still somewhat disappointing to arrive home to find that all that remained of the sunflower which had reached a height of 3 feet was a bare stalk measuring no more than 12 inches….

So we considered our options..   yell at it,   throw something at it,  ( not allowed to shoot it ) ,  chase it away,    feed it an apple….    well,  I am reminded of those tests that we took in school long ago  – look at the four pictures and decide which one does not belong..    –    hmm  what is he eating now?   Our new friend looks absolutely delighted..    No doubt, we will be kicking ourselves next summer  if he reappears to munch on our flowers..  but look how content he is!

Without traveling too far, we have been treated to a variety of wildlife sightings this week..   We also enjoyed mountain pies!     On Tuesday we did a local 4 mile walk around neighboring  Indian Lake.   Along the way we spotted two young deer less than 15 yards from the road.   They did not have spots but they were on the small side.. perhaps they were yearlings?     They were totally content to let us stand there and watch as they foraged through the thicket.

On Wednesday we took the kayaks to Brady’s Lake,  a 2 mile long lake tucked away at the end of a 3 mile dirt road not too far from our home.    Last year we saw an eagle at the lake, and this time we made it a point to paddle to the back end where we saw an immature eagle perched on a branch next to the nest.   From time to time it called out.   We were able to paddle close and just simply sit in our boats and  observe, hoping that one of the adults would return, but daylight was waning, so we had to head back …

And then this past weekend we  went to Lackawana State Park and camped – a celebration of our 7th wedding anniversary  🙂    On Friday evening the park staff showed a movie about Eagles,  and then on Saturday morning we joined a group kayak / bird watching group.    We were treated to  watching an osprey diving for fish along with great blue herons and various song birds.   We also startled some deer who were drinking at the waters edge.    On Saturday evening,  a local game warden came to the park and gave a presentation about trapping and tagging bears.    This is a topic of interest for us since we have had a visiting bear at our home.    We wrapped up the camping trip with a second paddle on  Sunday morning, again seeing the blue herons..

It was quite a week  and a great way to  spend our anniversary!